Established in memory of IIDR Master’s student Michael Kamin Hart, this scholarship was initially awarded in 2011 to a Master’s student who demonstrated the same degree of academic excellence, leadership, and enthusiasm for science that was evident in Michael. Thanks to the very generous support of Michael’s family and friends, the IIDR has since expanded this prestigious scholarship to include a summer undergraduate, Master’s, PhD, and Staff award.

Staff Award
The Michael Kamin Hart Memorial Staff Award is awarded to a technical staff member who has made outstanding contributions in their role during the past year and who has achieved excellence in demonstrating the IIDR’s core competencies and values. 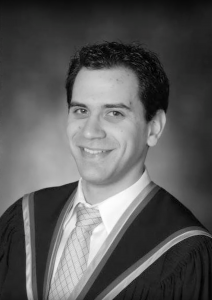 Michael Kamin Hart was a promising Master’s student at the IIDR, remembered by director Dr. Gerry Wright as “inquisitive and creative; a team player but also highly independent”. He was exceptionally dedicated to his research within Dr. Justin Nodwell’s lab, where he focused on discovering new antibiotics from environmental microbes that have the potential to be used as new drug candidates. In a short period of time, Michael identified, purified, and solved the structure of a potent antimicrobial molecule, 13-deoxytetrodecamycin. His enthusiasm and pursuit for knowledge was highly admirable.

Sadly, while in his second year of his Master’s degree, Michael was diagnosed with non-Hodgkin’s lymphoma, losing his courageous battle in 2011. Yet, Michael’s science continued to press forward, and in 2015 his research findings were published in The Journal of Antibiotics. Through his research, the molecule that he discovered exhibited potent activity against a strain of Staphylococcus aureus, known for its multi-drug-resistant nature. His discovery suggests a possible use for this molecule in treating infections caused by highly resistant bacteria – insight that is desperately needed given the current global antibiotic resistance crisis.

At the IIDR, Michael’s legacy lives on not only through his publication, but through the Michael Kamin Hart Memorial Scholarships established through his family and friends. Through these scholarships, Michael will forever be remembered as a dedicated young scientist, outstanding student, and loyal friend.